It was on my journeys through the chambers beneath an active volcano that I first encountered the Ferrumolsk. These creatures of fire, which greatly resembled giant snails, seemed at home in the scorching caverns. Though in a hurry to move to areas with more bearable temperatures, I couldn't help but watch these fascinating creatures for a while, to try an learn a little more about them.

After a few hours of observation, I found the heat to be becoming unbearable, so left for the day, already drawing up plans to return more prepared on the morrow. It took some convincing, but I finally had a sorcerer friend of mine whip me up some fire resistant clothing, as well as a few potions for the journey, and like that I made my way back the their den. I set up a small campsite inside the cavern with them, finding them to be mostly harmless (unless provoked). After watching for a few more hours, I noticed there were a few spots within the cavern that the creatures seemed to congregate. Taking it upon myself to investigate, I waited until later, after they had moved on to a different area, and then began to look.

It didn't take long for me to work it out, however, as the signs were quite obvious; the creatures were congregating to eat the iron ore deposits in the cavern floor! It seems these creatures have found a way to, not only consume and digest this metal, but also to extract it's properties and infuse them into their shells! The shells of these creatures were as solid as fine plate armour, and offer the creatures much protection against predators, though what would consider these creatures prey I hope not to find out...

After a morning of study, and a few sample collections, I decided to be on my way. Though I am sure that these creatures have a lot of potential for armourers, amongst other things.

Burning Hot Bodies. To process their diet of raw iron ore, the Ferrumolsk have extremely high body temperatures. Their core temperature is just shy of 1,600°c, more than hot enough to melt the iron ore, and causes damage to any creature trying to touch the Ferrumolsk. They can even spit fire from their mouths, as a defence mechanism, when threatened.

Naturally Armoured. Through their iron heavy diet, the Ferrumolsk incorporate the metal into their own shells. The shell of a Ferrumolsk is solid iron, and can be worked by a trained smith into incredible armours and weapons. Unfortunately, the creatures are very hard to hit due to their extremely sturdy armour, which they can withdraw inside to provide even more protection.

Sticky Bodies. Due to their snail like forms, the Ferrumolsk can climb any surface with ease, treating vertical surfaces, as well as ceilings, as normal terrain. The creatures can often be found halfway up walls and on cavern roofs eating and digesting the iron and stone for nourishment. 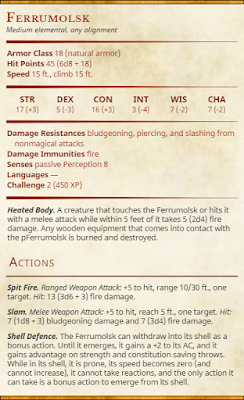