The Torch slime closely resembles a slug in its outward appearance, save for the near constant flame that it produces from its back. I remember encountering them for the first time the same day that I also first observed the Ferrumolsk.

One could easily mistake the Torch Slimes as being related to the Ferrumolsk, assuming them to simply be a shell-less version of the creature, however nothing could be further from the truth. The Ferrumolsk are snail-like elemental creatures, who live peacefully in the caverns beneath volcanic areas, whilst the Torch Slimes are vicious oozes, that will happily attack any creature they see, to feed.

The Torch Slimes are opportunistic creatures, and will regularly hang from the ceilings of volcanic caverns, only to drop down onto the heads of creatures passing through. The biggest threat, however, is not their fire, nor their powerful slams, but rather their slime trails. Wherever these creatures go, they seem to excrete a trail of molten hot slime, which lingers in the area, and can cause serious harm to living tissue. It is also, as I was unfortunate enough to find out firsthand, very slick.

When approaching one, in an attempt to study it further, I found myself flat on my back, having stood in its slime, with the residual heat leaving my skin burning from the contact. To make matters worse, the creature noticed me after this, and chose then to flare the fire on it's back, sending out a fiery shockwave which singed all of the hairs off of my arms (which were thankfully protecting my face). I quickly got myself back on my feet, and left to study the Ferrumolsk instead.

Opportunistic Predators. Torch Slimes can regularly be found hanging onto the ceilings of volcanic caverns, waiting to drop onto the heads of any creature unfortunate enough to walk into their lair. The slimes will continue to attack a creature after dropping on them, preferring to slam their red-hot bodies into them for maximum damage.

Heated Bodies. The body of a Torch Slime appears to be made from a viscous form of molten lava, coalesced into a living entity. Any creature that comes into contact with one will usually come away with third degree burns. The safest way to deal with a Torch Slime is generally considered to be from a distance, as it reduces the risk to the attacker, due to the creatures slow speed.

Ooze Trails. Wherever the Torch Slime goes, it leaves a trail of red hot, molten slime. Where it produces this slime from is still currently unknown, but it has been proven to be highly dangerous to adventurers. Not only is the slime extremely hot if in creature comes into contact with it, but it is also very slippery, and can easily trip an adventurer up, stopping them in their tracks. 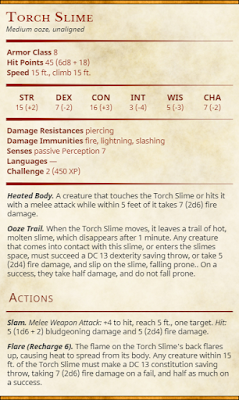